A bar chart is a diagram, presenting comparable data in discrete categories in the form of rectangular bars, that have either their heights or lengths proportional to the represented values. Generally, it consists of two axis. A nominal axis, showing the compared categories and an interval scaled axis, representing the measured value.

Beside the bar direction which can either be vertical or horizontal, two more properties will be distinguished for further considerations. First the diagram orientation, which is either landscape or portrait and second the distinction of categories, which can either be done by axis labels or distinct textures.

For categories which are distinguished by an axis label there is no need for distinct textures. As seen before, the availability of different line styles is very limited because of a lower resolution compared to tactile printing, but still use of line styles can be made to create a uniform texture, that provide an implicit scale to determine the bar size even when the axis is far away.

The uniform texture is basically a simple line pattern, either horizontal or vertical depending on the axis rotation, with intermediate dotted lines. The following depiction shows an example bar with the normal 'vertical_line' texture on top of a bar with the modified texture.

The uniform texture can be applied as long as the spacing between the axis divisions (tickmarks) is an even number of (at least 4) dots. The texture is applied by aligning the solid lines with the tickmarks. In this way, the texture allows to distinguish between whole and half unit steps.

All depictions of the bar chart prototypes are generated using a software called 'QuickTac' by Duxbury Systems. 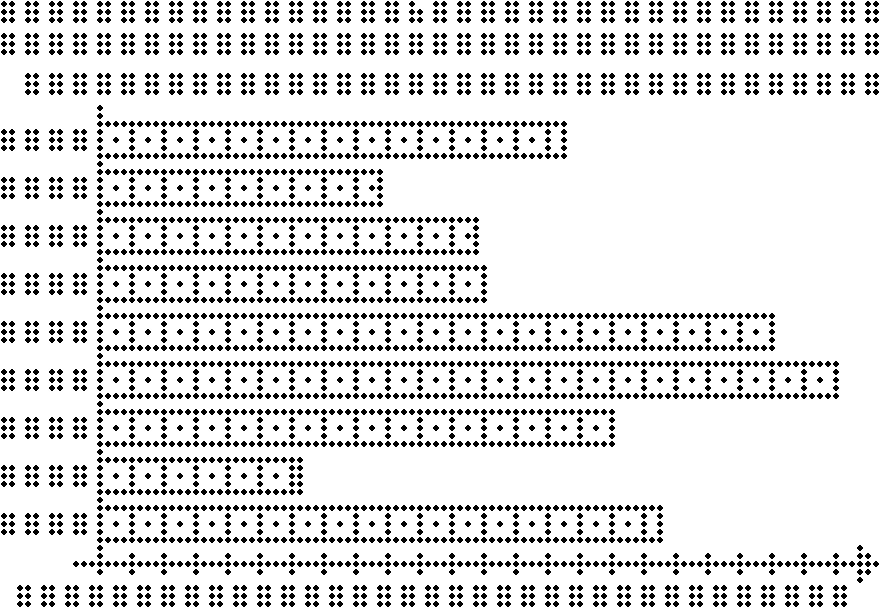 The given prototype shows a bar chart with uniform textured horizontal bars on an A4 sheet in landscape orientation. Of course, many other chart arrangements with varying advantages and disadvantages are possible.

In the following, an exemplary comparison of different arrangements and their impact on the depcitable amount of information is given.

The arrangement of a bar chart depends on three relevant properties, while charts with vertically oriented bars are sometimes called line charts instead of bar charts. This will be ignored for the sake of simplicity:

Technically the maximum amount of categories with distinct textures is limited by the amount of available textures. This is problematic, because appropriate distinguishable textures are rare when dealing with such low resolution. The width of bars with distinct texture is assumed to be 9 dots. Bars with uniform texture are described by 4 braille characters; horizontal: 5 dots wide, 1 dot spacing; vertical: 13 dots wide, 1 dot spacing. The axis units are 4 dots apart. Since changes of the resolution change the values linearly, this table can be used to compare the different arrangements.

So the best arragement depends on a number of different factors:

Since the goal of this analysis is to create a general concept, it should be able to not only cope with simple bar charts (i.e. single dataset) but also with complex charts featuring a comparison of multiple datasets. As it will become clear in the next sections discussion, this will require the use of bar textures.

When comparing the results in the table above, the layout of horizontal bars on a portrait format seems to deliver a good general tradeoff between the possible amount of bars and the value resolution. Because of this, the implementation will create horizontally oriented bars. The page orientation is actually not crucial for the implementation because of the way the rendering system is designed. This means that the same algorithm can be used to draw the given chart on any format, as long as some properties minimum limits are not violated. Different formats will simply result in different amounts of depictable bars and in different value ranges regarding resolution.

When it comes to displaying multiple sets of data in a single bar chart, there is the possibility to group the bars into categories or to stack them. However, stacked bar charts will not be discussed further or implemented, since they tend not to be well known amongst visually impaired users. In a recent evaluation conducted with a wide heterogenous set of 48 participants, "most participants were unfamiliar with stacked bars (69%). [...] The meaning of stacked bar charts can be misunderstood. Participants reported high mental effort when analysing data in stacked bar charts." (Engel & Weber, 2019: 13)

The width of the generated bars is mostly dependend on the overall available space and the distance between bars. When using textured bars, wider bars are considered more readable for the majority of visually impaired users as shown by (Engel & Weber, 2019: 13). Any implementation creating a braille version bar chart should therefore choose the maximum possible bar width. Since some users may disagree and to prevent very wide bars, a user defined limit should still be possible to apply.

Engel & Weber (2019) also presented the importance of the bar distance for the chart readability. Because of this, the user should also be able to define the distances between groups of bars and bars inside a group.